After 1825, the Abial Granger relocated to Dunham, Lower Canada and lived next to his wife's Gleason Family.

Especially lawless were the settlements along the American border such as Dunham where it was said 90% of the families were involved in making or passing Counterfeit Bills. There were no police, courts, or prisons, and no customs officers to patrol the border. The law-abiding people complained that the township was the home to a class of good-for-nothings. Everyday occurrences, particularly the stealing of horses and passing of Counterfeit Bills was common and almost unheeded. However, this was soon to change. Somehow, the Abial Granger family was spared the court actions and prison terms of Abial's wife Gleason Family in the following story that happened in Dunham, Canada located just over the Vermont, US border. 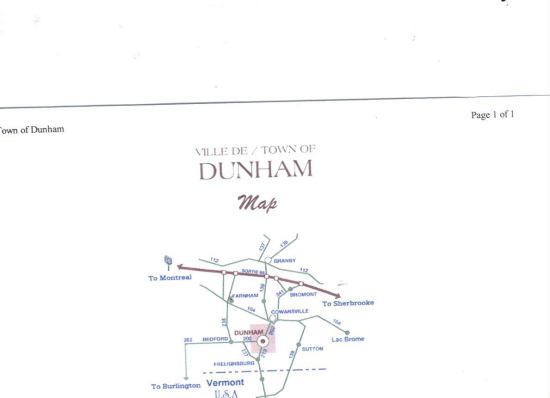 Both families became involved with counterfeiting U. S. Bank Notes

With the end of the War of 1812, authorities in Montreal and representatives of a number of banks in the United States began to crack down on counterfeiters of U. S. bank notes. However, it was in the 1830's before authorities began to enforce the laws. 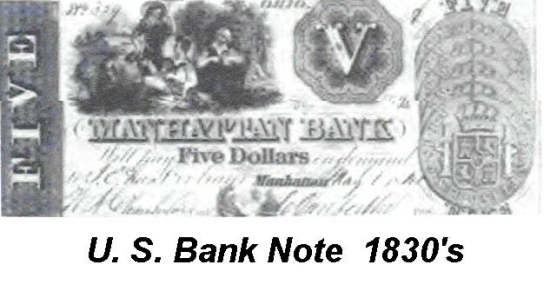 The reason they had to do so: the counterfeiters of Dunham and St. Armand had formed an alliance, as was discovered when two people hired by the bailiff of Montreal paid a visit to Dunham, Canada on October 14, 1818. They visited with the denizens of Cogniac Street, playing the part of buyers of counterfeits on banks in the United States. reporting that a gang of individuals -- Thomas Adams Lewis, Seneca Page, Elijah Hurd, Ebenezer Gleason, and Joseph Brace -- " informed us that they conducted the counterfeiting business in company and that they ...received equal proportions of the profits arising thereupon..." After reviewing some samples of three dollar bills of the Bank of Hudson and five dollar bills on Bank of Plattsburgh, they ordered a shipment, which the Dunham entrepreneurs promised to be delivered on or before the 15th day of November..." With the exception of the customers being undercover agents, this was a typical transaction on Cogniac Street. Someone interested in padding or selling counterfeit notes would pay a visit to Dunham, and more than often than not, he would bring a copy of the note he wished to have counterfeited. The illegal business went on for many years until an arrest was made as written in the newspaper, The Daily Evening Transcript, Saturday evening August 24, 1833 "Apprehension of the Canadian Counterfeiters" ....."the bold and daring gang of counterfeiters who were known to exist in Lower Canada and on the frontiers were deluging the country with forged bank notes and the situation had to change. An organization was formed with city banks paying $100 and county banks paying $25.00 per annum to a common fund for the apprehension of the counterfeiters. Although they detected and delivered over to justice 25 or 30 of the "small fry" involved they were unable to lay hands on the counterfeiters themselves, until lately. Sheriff Col. Butterfield, of Tyngeborough, Canada was employed to execute the plan that was laid out. He first went to Stanstead in Lower Canada and made arrangements to secure assistance with the principal inhabitants, then he went to Montreal and after meeting with the Attorney General was furnished with a large constabulary force, which after he returned to Derby in Vermont, and received additional assistance and advice from Mr. Redfield the county attorney. Two large parties, consisting of 80 men each were organized, one of which proceeded to Stanstead, and the other to Dunham, in Lower Canada, about 40 miles apart, and before any suspicion was excited, and at a time when it was know from previous information that most of the counterfeiters would be at home, their homes were surrounded and the inmates apprehended. No violent resistance was offered except in two houses, where the doors were very heavily secured, it was found necessary to break them down with logs of wood. At Stanstead, a total of 12 persons were apprehended. At Dunham, the number of counterfeiters taken was 13: Ebenezer Gleason, Sr., Ebenezer P Gleason, Jr., Horace Gleason, Samuel Gleason, and nine other persons. Thirteen plates of different bank were found in their possession---a large amount of forged notes, besides a quantity of of counterfeit hard money, with dies for stamping, a great deal of very costly machinery necessary to their purpose, together with a considerable quantity of zinc, copper, etc, in short, a complete and entire apparatus for counterfeiting on the most extensive scale. The persons apprehended in Stanstead were taken to prison in Sherbrooke, L.C. and those taken at Dunham were ironed and marched under the guard of a troop of Cavalry to Montreal. It may not be generally known to our readers that counterfeiting of American Bank Bills has existed as a regular business in Canada for many years, and the counterfeiters have been known, although no attempt has been made to break up the establishment until now. It has employed 100's of people, who are divided into classes. 1. The first and principal are the engravers and signers of the notes. This group is mentioned in paragraphs above. They never pass the bills themselves, but sell them wholesale to a second class. 2. Buy wholesale and sell retail the notes to users. 3. The third class pass the notes to the people at large as an opportunity offers. The great objective has been to get rid of the first class, the ingenious engravers and writers from whom the bills emanate. They being out of the way, the lesser rogues will be reformed as a matter of course.

The Repertory Newspaper, Thursday, Sep 19, 1833-- The Montreal Gazetta furnished a annexed paragraph, the details respecting the convictions for forgery. "On Thursday last, the first trail of the Dunham counterfeiters took place at the Court of the King's Bench. The prisoners were ten in number including: Ebenezer Gleason Sr. and his sons Ebenezer P Gleason, Willard, Samuel, and Horace. After a very long trial the jury brought the verdict of -- Guilty against the father Ebenezer Gleason. Second trial: Having in their possession plates for forging the notes of the Harrisburgh Bank of Pennsylvania, Sussex Bank and Commercial Bank of New Jersey, and Fulton Bank of New York. The jury brought the verdict of: Guilty against the father Ebenezer Gleason, and his sons Ebenezer P. Gleason, Horace and Willard and 3 others. Not Guilty: Samuel Gleason and 3 others Connecticut Courant 9/2/1833 Apprehension of Canadian Counterfeiters ..."At Stansted and Barnston eleven persons were apprehended, viz. Reuben Hill, Isaac Hill, Daniel Sprague,Nathaniel Hollister, Henry Hollister, Edward L. Southmaid, Robert Marsh, Sylvester Cleaveland, Y. McNeal, S. Elmes, and Richard Baldwin. At Dunham the number of counterfeiters was thirteen, viz. Eben Gleason, Sen., Eben Gleason, Jr., Horace Gleason, Samuel Gleason, Benjamin Moses, Reuben Moses, Willis Sherman, Dr. Jonas Boardman, Alexander Nelson, Benjamin D. Wing, Artemus Howe and - Jones."

The Canada Rebellion of 1837 and 1838 effected many people of Lower Canada. Many settlers returned to the United States and since Illinois was just open to settlers, DeKalb County, Illinois became home to all types.