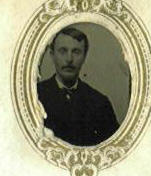 Minard Granger and Abial Granger were very close brothers in DeKalb Co. Illinois and were involved with the Gleason families in activities that were often illegal.

Comments by #2 Minard passed several counterfeit "Mexican dollars" and a few silver dollars to a bunch of people in Queensbury N Y, on November 21, 1844. I didn't know what Mexican dollars were but here it's explained... 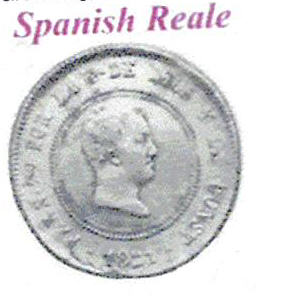 During and in the years after the American Revolution the fledgling United States lacked a national currency and this situation was to cause serious economic problems. As a solution to this crisis, the Federal Government adopted the so-called Spanish Milled Dollars as legal tender until the United States could produce it's own money. These "dollars" were actually Spanish 8 real silver coins minted in Mexico City for use throughout the Spanish Empire and were the international currency of the day. These coins were in common circulation in the United States well into the 19th Century. If the popular story of George Washington throwing a silver dollar across the Potomac River is true, it would have been a Spanish 8 real coin that was tossed into legend.......pieces of eight!

By year 1860 Minard Granger had been imprisoned in the Auburn New York State Prison for forgery and making illegal U S Bank Note plates.

He was a class 1, money counterfeiter, which were the main operators as makers of the illegal money. Class 2, money wholesalers and class 3 money passers were not given prison terms but were arrested and given warnings.

Minard Granger was arrested in Illinois and was taken back to N Y to serve  his sentence. If he had not been returned to N Y by the federal authorities,  Minard  would  have a much harsher penalty according to Illinois Laws.

On Jan. 11, 1816, the law in the Illinois Territory set the penalty for counterfeiting at "death by hanging, without benefit of clergy." [2]
Other penalties listed in this law ranged from death to paying "a fine of four fold the amount of such note or bill" or beating with "not less than thirty-nine lashes well laid on, on his bare back" for such things as manufacturing or bringing paper into the Illinois territory to be used for counterfeiting, making or concealing plates used for counterfeiting, and passing or assisting others in passing counterfeit notes.
In 1818, Illinois received statehood. At its first General Assembly held at Kaskaskia, on February 27, 1819, the penalty for counterfeiting was lessened to a $500 fine and 75 lashes. In addition, the convicted felon would "be deemed infamous, ad be held incapable of holding any office, or giving testimony in any case whatever." [3]
This same penalty went for anyone found manufacturing or bringing paper into the state for counterfeiting purposes and making the counterfeiting plates. However, for passing or assisting in the passing of bogus notes or concealing money moulds carried a penalty of a $500 fine plus "thirty-nine lashes to the bare back." If this fine was not paid, the person was to be committed to jail until the next term of court. If the fine was still not paid, the Sheriff was to sell the offender to the highest bidder for a term of servitude of seven years. Should the person sold try to run away from his master, his term of servitude would be increased.
In 1821, this law was strengthened to include counterfeiting gold or silver coins with the same punishment as above (Laws of Illinois, Feb. 12, 1821

See below the marriage picture of Caroline Granger and husband Gottlieb Froelich. 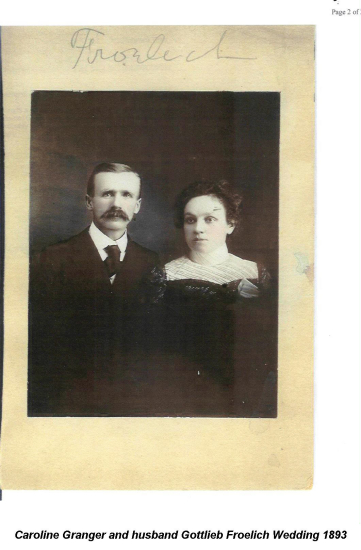