I located and old letter dated May 12, 1943 from my grandfather Lester Granger to my father Willard A. Granger.  He gives instructuions to my father on planting trees in the Greenwood Cemetery,  Nashua, Chickasaw Co. Iowa , on his grave when is gone.

He also mentions his father, Ebenezer Granger- son of Abial Granger, and what he had told  him about going out to pick some wild flowers and drop on his grave.

Quote: Let, I wish you would not forget me on Decoration Day.  Just go out in the pasture and pick a wild flower or two and drop it on my grave, will you?  Don't go and buy flowers.  I told him I would do the best I could at it." 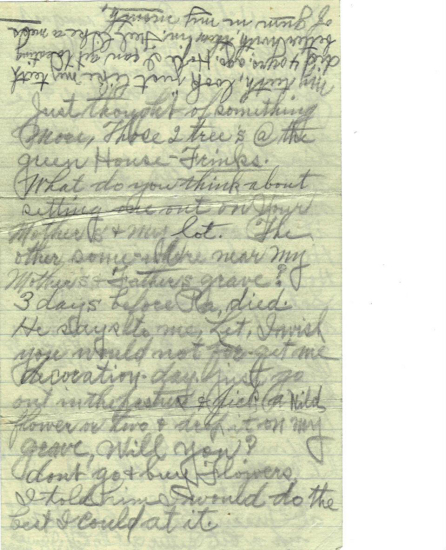 I think after Ebenezer Granger had stressed to his children that the grandfather was to be forgotten and not honored or remembered even with flowers,  he is now worried that his children will likewise forget him. He will be happy if only they give  a little love to him after he is gone with just a wild flower or two.

My grandfather Lester Granger on the other hand, wants trees planted over his grave  in Greenwood Cemetery by his son, Willard Granger.

I remember all the family including my aunts going to the Evergreen Cemetery in Nashua, as I recall till the early 1950's.  Flowers were grown by my aunts and my parents and not bought.  Mostly,  Iris and Tulips picked the night before and  they also added Lilacs for a mix. Never remember going to the Horton Cemetery, located not far,  just over the county border in Bremer Co.

*Comments by my younger brother Robert (Bob) Granger on his trips to the Nashua Greenwood Cemetery, continued years after 1950's.

For the "Abial Granger treatment by children" page, I remember when was in grade school before moving to the Falls Avenue address at the start of jr. high school, that aunt Gertrude always had fresh peonies to put on the graves at Nashua (white and pink). We would pick her up at what she called her "bungalo" house (near Brynes Park?) before leaving Waterloo and load up all her containers of peonies. Mother would take the Iris that were grown on the east side of the house at the Cornwall Street address. We sometimes would do mom's relatives graves before heading off to the cemetery at Nashua. Am glad that you have the red book and can use of it online in doing your Granger ancestry activities

Their father Ebenezer Granger had a lot of influence  on the family. They followed his flower instructions of not buying flowers and used milk bottles to put them in on the graves.

The family for several generations  did not honor the g grandfather,  Abial Granger, son of John Martin Granger.  They hid the family history and Abial was not mentioned in BIOS, ORBITS, and newspaper acticles.  Only general references were made to birth places, name of parents omitted in death cert. ,   and etc.  It is hard to believe that Abial's children: Willard, Orwill, Mariah, Ebenezer, and Charles;  and then their children would never honor their father and grandfather.

After the Abial Granger family arrived in Bremer County, Iowa the family began a new lifestyle.  They may have been thinking the father Abial Granger was wanted by authorities for past activities in Canada and DeKalb County, Ill.  Abial's brother had been arrested in Illinois and the Gleasons (His wife's relatives) were involved in several illegal activites and had served prison terms.

Ebenezer Granger, became well know as a Justice of the Peace,  businessman,  and  President of Nashua Water Co.

Mariah Granger married Marcus Marsh,  had a large farm in Bremer Co, Iowa and then much later moved to Nebr.

The Granger Graves in Horton Cemetery, Polk Twsp, Bremer Co, Iowa were remembered in 2006, thanks to the efforts of Karlyn of Bremer Co. Geo Soc.