Ebenezer A Granger was born in Lower Canada.Vermont on 2 Nov., 1834 and when he was 7 years old the family moved to DeKalb County, Ill.  There he received a common  school education, and passed his youth.  In 1855, he came west to Iowa settling first in Bremer Co., Iowa and purchased land in Polk Township.  He then returned to Illinois where he married Miss Olive Marsh, native of New York, daughter of Alvia and Hannah (House) Marsh, on 22 Feb. 1855. The following fall, he brought his young wife to their new western home, where by industry and perseverance, now own 320 acres of well-improved land, valued at $30 an acre.

Mr Granger is a republican, and has held several of the local offices. (see letter below). They have four children - W A Granger, Adolphus, Ella, and Lester A Granger. Mr Granger is one of the most enterprising and successful farmer in Polk Township, Bremer Co, Iowa. 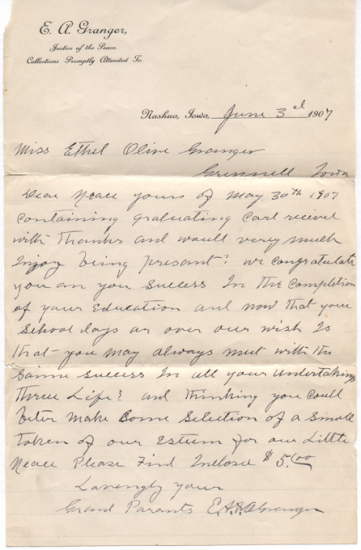 In 1888 or 1889, Mr Granger rented the family farm to his son Lester A Granger, and moved to Nashua, Chickasaw County, Iowa. Here he became president of the Nashua Water Power Co. and was dominant factor in the management of the corporation, continuing in that capacity until his death, which occured 5 Oct., 1907.  He was in his seventy-fourth year.  His wife Olive (Marsh)Granger survived him until June 1917, passing away at the age of seventy-six years. 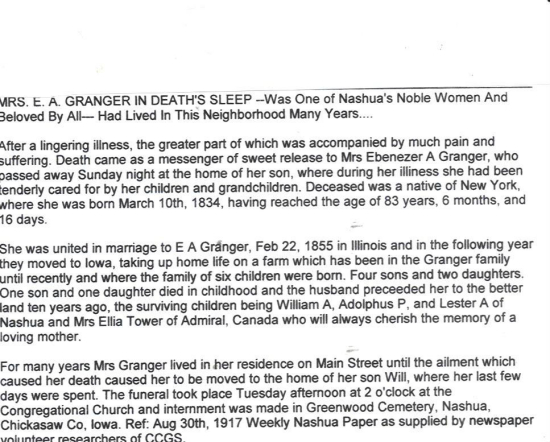