The following photos of Lester and Carrie Granger with their children and grandchildren are persons that are all deceased as of 2006. 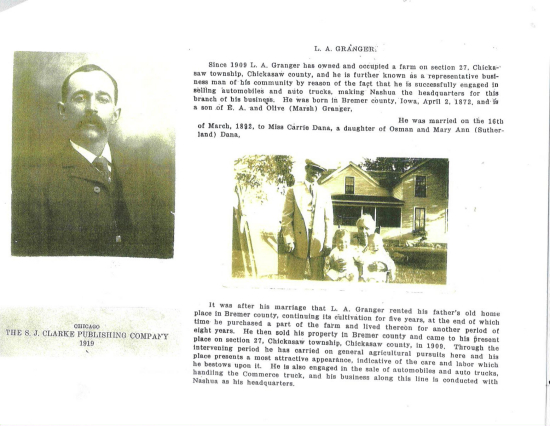 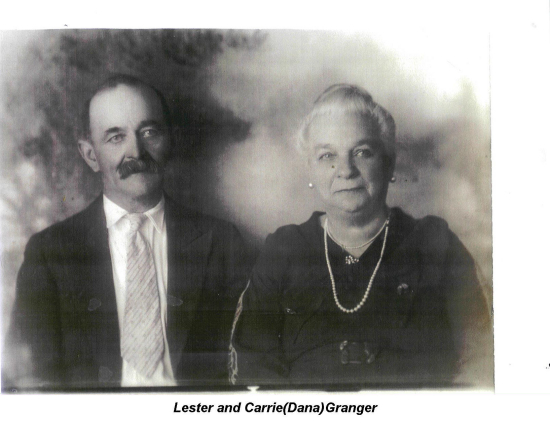 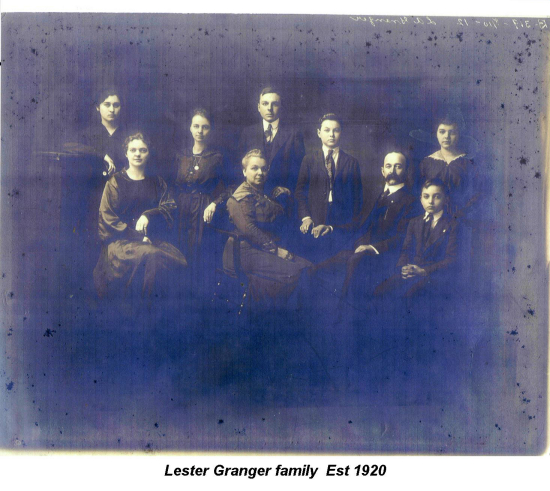 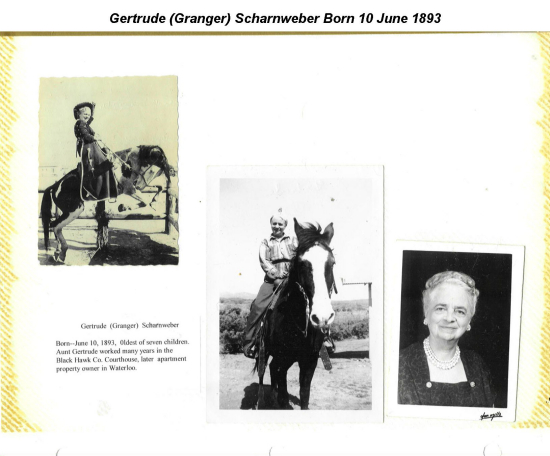 The Chickasaw Co, Iowa family farmhouse where the Lester Granger family resided 1899 to 1920.

Picture of 4 daughters, Gertrude, Helen, Hazel, Florence, and on right son Willard Granger. Two sons Ebenezer and Harold both died of sleeping sickness while in their 30's and neither married. 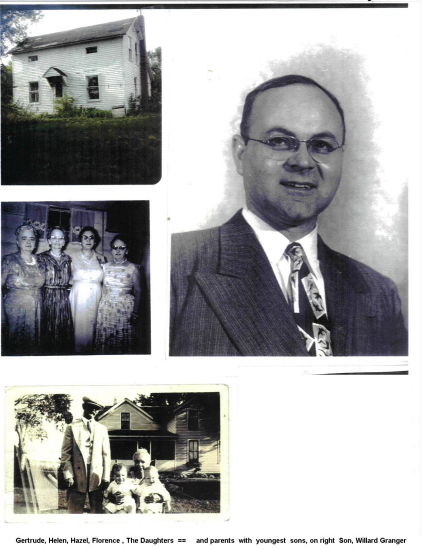 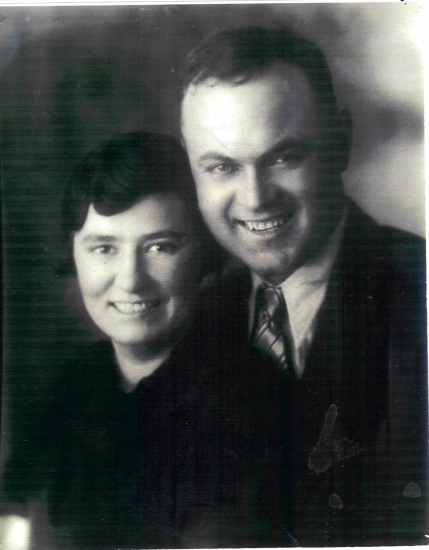 Lester Granger after his wife had died, in 1941 took a trip to the west coast just as World War 2 began. He describes what he saw and the relation he visited.

The following article was written by Lester Granger, who was born in Bremer County, Iowa on 2 April 1872 and died Nov 1944 in Tacoma, Washington at age 72 years, and is buried in Greenwood Cemetery, Nashua, Iowa. He lived in Chickasaw County from 1907 to 1929 where he farmed and operated a Truck and Auto Dealership in Nashua.

At the time of writing this news article, he had retired as Assistant Park Maintenance Director, in Waterloo, Black Hawk County, Iowa and the newspaper article reflects his interest in plants and parks around the country. Since World War II was only in the first months, Lester Granger writes about what he saw and how it effected his travels during wartime.

I left my home at 926 Independence Ave., Waterloo, Iowa on Dec. 15, 1941, taking the southern route to Arizona, New Mexico, and over the mountains to Los Angeles, Calif., and from there to Petaluma. Here I spent about 10 days visiting cousins whom I had never met before. They went with me to San Francisco about 40 miles by way of the San Francisco-Oakland Bay bridge. It is 8 1/2 miles in length, the main spans are 2,320 feet long and the width is 58 feet making it the largest bridge in the world. It was built at a cost of $77,000,000. We also went over the Golden Gate bridge from San Francisco to Marin County. This bridge has the worlds largest span. The main structure is 8,940 feet long. There are two ten foot sidewalks and six lanes for vehicular traffic, the total width being 90 feet. Total length including approaches is seven miles and it cost $35,000,000. From there we went on to the main Gate-Way of the 1939 Golden Gate International Exposition on Treasure Island in the San Francisco Bay. A great many of the world's fair buildings are still standing. Among them, the Giant Elephant Towers, Dutch Wind Mill, and many others. We saw three British Ships in the harbor being repaired.

The Yosemite National Park ( Note: This reference is an error since he makes note of redwood trees found north of San Francisco on Highway 101) with its giant redwood trees, was of especial interest to me. I saw one tree with an automobile standing inside of it, another with a store built inside of it, children looking out the door at us as we drove by. I also saw a fair-sized house on the highway built from the lumber of one tree.

I got to Eugene, Oregon, for Christmas dinner with my daughter Hazel, and niece, the former Blanche Roberge and their families. I left there in time to eat New Year's dinner with my sister, Ella Tower, at Tacoma. Wash. I had not seen her for 27 years. Also visited with her daughter Susie and family and with Ollie Bucklin, my brother Dolph's (Granger) oldest girl and family.

While in Tacoma, my sister and I went out about nine miles to "Point Defiance", a wonderful park and aquarium. The Lincoln Park and the Lincoln Bowl in Tacoma were very interesting to me, especially the arrangement of the flower beds. We also went to Seattle for a day of sight seeing. One surely needs good brakes going either East or West on the hilly streets in that city. Of course I wanted to see "Wood-Land" Park, where they have many animals including South American and Polar bears, fur bearing seals, baboons and raccoons from East Africa; leopard and kangaroos from Asia, Africa, etc. In "Wright Park", I saw searchlights four feet across and a sound detector which was very interesting and a wonderful machine.

At Tacoma I saw 11 ships being built in the harbor, three of them were about done. On my way from Tacoma, Wash. to Portland, Oregon, I was forced to stop in Fort Lewis for about one-half hour as the road was blocked by soldiers being shipped out and coming in by trains and trucks. At Portland, Ore., I phoned my cousin Ray Dana and spent over a week with him and his family. Also saw Curt Tucker, August Wedemeyer and family, Joe Plant of Oregon City, and his wife and daughter.

While in Portland, Ray Dana showed me the place thoroughly, including a visit to Washington Park, 800 feet above sea level. At Eugene, Ore., I visited my daughter and family for several weeks. While there I took many fine trips in the country. On one of my most enjoyable rides, I went to Salem to the state capital which is 75 miles from Eugene.

Before leaving Eugene, Oregon, I went through one of the largest greenhouses in Oregon. There I saw a banana tree growing. The bananas grow in bunches and as soon as the bunch is ripened, the limb on which it grows dies. The blossoms seem to be more like buds on the end of each bunch of fruit, the bananas forming in tiers directly under them. The tree was 14 feet high.

From Eugene, I traveled by bus, to Castle Rock, Wash> where I spent several days with a niece and nephew, Mr. and Mrs. Thomas Jordon. Mrs. Jordon may be remembered by a few as Ruth Granger. She lived at Waterloo, before going to Washington with her parents. The Jordon's took me on several trips.

We first saw Kelso, Washington, one of the oldest water front towns in that part of the country. At a flower shop, there I saw many different plants and flowers which were of interest to me, and I purchased a Scotch Heather shrub, a Flowering Daphne, and other plants, which I hope to grow in Waterloo. We crossed the Cowlitz River over the bridge between Kelso and Longview. Longview is called "The beautiful city with vision built"--the one planned city of the northwest, with its million dollar high school (given to Longview by R. A. Long) and named for him.

Then we visited Lake Sacajewea and its adjoining parks, and the Monticello Hotel which has beautiful parks on all sides. We walked through these and the tulips, daffodils, and other early flowers were just coming through the many perfectly kept flower beds. Later on these beds will be aglow with color. Longview has two huge lumber companies, an aluminum plant, and a pulp and paper mill. The Weyerhawser and Long Bell Lumber companies ship lumber all around the world. The new Longview Rainier bridge, over the Columbia River between Oregon and Washington is quite a sight too. It is high enough to permit ships to pass beneath it. The most beautiful part of the trip, was the drive down the Columbia River on the Ocean Beach Highway, with its high cliffs of rock, on one side, by evergreens and covered with red current, pussy willows, ferns and other native plaints, and here and there a waterfall. The rock cliffs on one side of the highway were at least 200 feet high, and on the other side was the mighty Columbia. Looking across the river a person could see the purple hills of Oregon. They are really purple, when the sun shines on them.

I happened to be in Castle Rock at the time of the year when the smelt fish were running in the Cowlitz River. Had the experience of dipping them. A net is used on the end of a long pole. One dip is often enough to fill a bucket. A couple of dozen make just the right number for breakfast, I found, and they are really delicious. They average in size from three to nine inches. During the smelt season the seagulls, large white birds, simply swarm over the water, and feast on the smelt. They are noisy too.

When my visit was over at Castle Rock, I started my homeward trip. The irrigation project at Twin Falls, Idaho, was unusually interesting. Here, they irrigate about 220,000 acres of land. The main irrigation canals are 100 feet wide and 14 feet deep. They say they raise 300 to 400 100- lb bags of potatoes per acre on the irrigated land; 100 bushels of wheat, or seven tons of alfalfa hay. An indication of the wealth of that farming locality is the fact that the Twin Falls Bank has deposits of $7,000,000.

I stopped en route at Salt Lake City for three days of sight-seeing. At the big Mormon Church, I enjoyed hearing the 325 member Tabernacle Choir in person. The pipe organ which accompanied their singing was built of white pine timber, hauled many miles from south Utah, by oxen team. It has over 700 pipes ranging from 5/8 to 2 inch diameter by 32 feet in length, and said to be one of the finest organs in the world.

From there I came directly back to good old Iowa, " where the corn grows" arriving in Waterloo, March 19th. The three months I had been gone not only provided many delightful hours, but also gave me a much newer knowledge about this wonderful county of ours.