Military Members In Expanded Family of Launcelot Granger Since 1600's 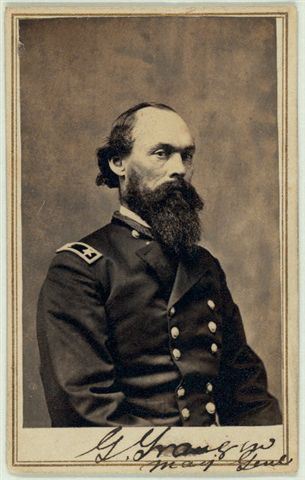 General Granger fought at the Battle of Chickamauga and saved the day.

He is most famous for his actions commanding the Reserve Corps at the Battle of Chickamauga . There on September 20 , 1863 , the second day of the battle, he reinforced, without orders, Major General George H. Thomas's XIV Corps on Snodgrass Hill. This action staved off the Confederate attackers until dark, permitting the Federal forces to retreat in good order and helping earn the sobriquet "Rock of Chickamauga" for Thomas.

Private Daniel Granger's description of cooking on the march, 17 October 1777:


We struck up a fire by a large Stump, on with [camp] Kittle, to make some hasty Pudding, & an other Kettle to heat some water to steep some Tea ... when don I took a long Board from a Fence, lade one end on the fence & the other on a stump, took off my Kittle of Pudding, turned it out in six Piles on the Board ... when the Mess came & saw the Pudding on a Board, it made some sport, we had Sugar in our Packs which we used with our Pudding & Tea, (our Meat had been cooked) we ate as fast as possible, expecting every moment to hear the drums beating ..

( I ) Zadock GRANGER, the great-great-grandfather of Henry Francis GRANGER, was born in Suffield county, Connecticut; enlisted in a Massachusetts regiment, and served as a colonel during the revolutionary war. Later he removed to Halford's Landing, the present site of Rochester, New York. His younger brother was killed at the battle of Bunker Hill.

The One Hundred and Twenty-ninth Infantry was organized at Pontiac in August, 1862, by Colonel George P. Smith, and was mustered into the United States service September 8. Five companies were from Livingston county, four from Scott county and one from Rock Island county.

On the 22d of September the Regiment left Pontiac with 927 officers and men, and reported at Louisville, Ky.

On October 3, marched in pursuit of Bragg, via Frankfort and Danville, to Crab Orchard. On 17th, the Brigade was transferred to Tenth Division, Brigadier General R. S. Granger commanding. Commenced the return march October 20, and moved, via Danville, Perryville and Mumfordsville, to Bowling Green. On 21st November, the One Hundred and Twenty-ninth was sent as garrison to Mitchellville, Ky.

From the middle of December, 1863, till the first of June, 1864, the One Hundred and Twenty-ninth guarded the railroad from Bowling Green, Ky., to Gallatin, Tenn., during which time it had frequent collisions with the rebels in repelling their attacks on the railroad.

From the 1st of June till the 22d of August, it garrisoned Fort Thomas at Gallatin, which was threatened by Morgan and his entire command who approached to within about eight miles of the works, and then thinking discretion the better part of valor the celebrated General beat a retreat.

On the 22d of August, it took up the line of march for Nashville, and remained there in garrison till the 24th of February, 1864; then took the line of march for Wauhatchie Valley, arriving about the middle of March. Previous to this it was assigned to the First Brigade of the third Division of the Twentieth Corps.

On May 3d, it left with Sherman's grand army for Atlanta. On the march it participated in the battles of Resaca, Buzzard's Roost, Lost Mountain, Dallas, Peach Tree Creek and Atlanta. From the latter place it started upon the grand march to the sea, and bore its share in that and in the subsequent campaign in the Carolinas. It took a conspicious part at Averysboro and Bentonville. At the conclusion of this campaign the Regiment marched to Washington and participated in the national review there. From thence it proceeded to Chicago where it arrived the 10th of June, 1865, when it received final payment and discharge.

Transcribed by Susan Tortorelli
From Wikipedia, the free encyclopedia
Jump to: navigation , search

Robert Seaman Granger (May 24, 1816 – April 25, 1894) was a career officer in the United States Army , reaching the brevet rank of major general in the Union Army during the American Civil War .

Granger was born in Zanesville, Ohio . He graduated from the United States Military Academy , placing 28th in the class of 1838. Granger became a first lieutenant of infantry in 1839. He served as an officer in the Seminole War , and was assistant instructor of tactics at West Point in 1843–44. During the Mexican-American War , Granger was promoted to captain on September 8, 1847. When the war ended, he was assigned to a series of posts on the Texas frontier .

With the outbreak of the Civil War and the secession of Texas in early 1861, he was captured with Major Sibley's command on April 27. He was paroled with the stipulation that he not serve in the field again until August 1862, when he was formally exchanged. During this period, he was promoted to major on September 9, 1861, and organized an infantry brigade at Mansfield, Ohio . He was the commandant of the troops at Louisville, Kentucky .

On September 1, 1862, following his exchange, he was commissioned brigadier general of Kentucky volunteers, and commanded the Kentucky state troops. He saw action in a series of small engagements—Shepherdsville, Lebanon Junction, and Lawrenceburg, for which he was brevetted as a colonel in the Regular Army . He received his commission as brigadier general of U. S. volunteers on October 20, 1862, and commanded a division . In 1863, he returned to administrative duty, commanding the Districts of Nashville and Middle Tennessee. In early 1864, he superintended the defenses and organized the depot at Nashville. He was then assigned to the command of the District of Northern Alabama, and was engaged in the capture of General Roddy's camp, in the expulsion of Joseph Wheeler from middle Tennessee, and in the defense against Nathan Bedford Forrest 's raid. In October 1864, he defended Decatur, Alabama against John B. Hood 's army, made a sortie on the Confederate siege-works, and received the brevet of brigadier general in the Regular Army for these services.

He commanded in northern Alabama in 1865 during the occupation. He was brevetted major general in the Regular Army for his services during the war and was promoted lieutenant colonel on June 12, 1865 and colonel on August 16, 1871. Granger was placed on the retired list January 1, 1873.

He died in Washington, D.C.