Some of the first comments about Indian ancestry was mentioned by Bill Sikora in his letter and family history booklet. Jeanne Parks and Leonard Granger have also noticed Indian traits in their family and children.

Well, to me it's like your family trying to distance themselves from Abial and his notorious past,
That was the way my mother's family of Grangers was regarding "those other Grangers".
Seems the 2 brothers, Allen, the firstborn, and Leverett drifted farther and farther apart as the years went by. Allen stuck to the Indian ways, lived in a pretty isolated "hollow" where his father had settled. Leverett (and later William) distanced themselves from him and became more mainstream and "white" - looking to buy up more land and make more money and become more a part of that Presbyterian society. Meanwhile there was their brother Allen just a few miles away selling his herbs and practicing as a healer.
Yes, very interesting.
In a message dated 11/5/2006 8:44:38 AM Eastern Standard Time, Buzgen@aol.com writes:

My grandfather was full Mohawk, and I have found that Native Americans in the
1900s were not eager to make their heritage officially known. My
grandfather, for example, told people he was Italian so he could get a job in Rochester.
On the census, marriage license, and other official papers he listed himself
as white. I think you will find very little assistance in official records.

If you have a maiden name, one possible resource is the three-volume set of
books by Toni Jolly Prevost, Indians from New York. It might show a
reservation in NY where families of that name lived.

Sometimes there was a lot of moving back and forth between NY and Canada.
Iroquois, for example, do not recognize the Canadian-American border because
their people were in those lands before the border existed. Many people from
reserves around Montreal - Kahnawake and others - came to NY city to work in the
1920s and 30s. There are other reserves in Ontario, Six Nations in Brantford
and Tyendinaga in Bay of Quinte that I'm familiar with, and I'm sure there
are more. The Archives of Canada online can be very helpful if you search under
First Nations or Native American, since Canada maintained the reserve system
under Indian agents into the mid-20th century, and there are mountains of
documents and reports from the Indian agents to their government superiors.
Good luck!

The Abial Granger line from John Martin Granger, is documented by pictures of Indian ancestors found in a Granger Picture Album dating to late 1800's. 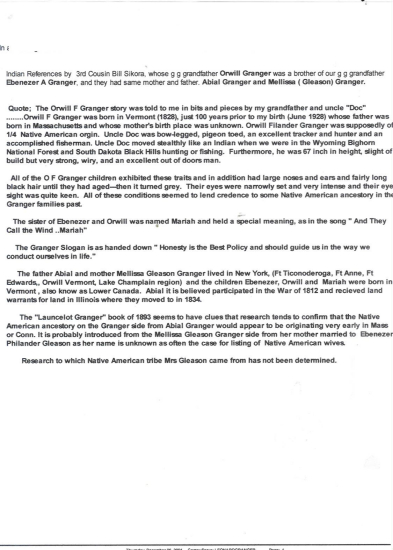