House Heirs Association: Part III, Where Did They Get All That Land?

If you've been following along on this crazy journey to resurrect the collected facts, trivia, and stories about the House Heirs Association (HHA) you'll remember in Part Iwe checked out the basics of it all and in Part II we followed the money. In this post we'll try to figure out and untangle what's known about how the House men got possession of that land in the first place. But first the usual recap of the HHA.

Here's a recap of what the House Heirs Association is all about. In a nutshell, the descendants of one Andrew V. House (1700 - 1797) believed that he and his son, John Valentine House (1739 - 1843), had supposedly been swindled out of payment from the US Government for a 99 year land lease on an immense tract of land they owned, reported to be as large as 64,000 acres. At the end of the lease the government and people living on that land in about 1884 or 85, located roughly in Frederick County, Maryland, all forgot that the House family were the rightful owners.

So where the heck did they get all that land? I'm still curious even though lately I've been suspicious that we're actually related to this House line! In an old document in Mom's possession our connection through Samuel Albert House, my 2nd great grandfather, is outlined. It was about 1900 and times were hard and people must have seen this as an opportunity to enjoy wealth, because the estimate was that everyone would get $2 million. Now, you need to know that Samuel Albert lived in a small rural village in the back woods of West Virginia and scraped by, as best we can tell. It amuses me to think what he might have done with a $2M pay day:)

Back to the main question of the day: where did they get that land? It was a gigantic parcel, some 64,000 acres. Where would they get that?! There are mentions about the original land grant in HHA documents but the attorney who represented the HHA states in a letter (with no date but presumably after the 1901 Kokomo Indiana meeting) that "much time and effort has been spent in writing to parties who were said to have papers and records but none have been found to throw any light on the matter." He goes on to say, "we have found nothing, except, perhaps family history".

That said, the next posting by Mr. Granger to the RootsWeb message board listed as House Heirs Association meeting Williamstown, KY, Jan 9th, 1899, concerns a letter dated December 18, 1899, reportedly coming from "a London Law Office" and here's what it said, in a nutshell. (I've underlined the descendancy stuff for easier reference.)

1.  The House records and estate of Andrew House by metes and bounds was first ceded to Count Frederick Edward Van Hautzen by Pudshers from the English Government, in the 16th Century.
2. It was attached as part of the Commonwealth of Maryland to the Calvert Government, which with the Estate of Lord Baltimore, it reverted back to the Crown, being regranted in the 17th Century to Andrew House, who was the Great Grandson of Count Frederick, from the latter Frederick County was named.
3. This land was given to Andrew House as a birthday present, if he would enter this grant: he was also given the coat of arms: signatures and seals (a different House Mediveael Coat of Arms), cord and dagger.
4. From Andrew House it descended to John Valentine House, the eldest child and his heirs.
5. Neither patent or grant was ever recorded in Maryland, but a search of the British Colonies Offices in the 17th and 18th Century will reveal the Grant and old will of those records.

The writer of this letter, who sounds awfully certain of it all, states,"The search for you will cost about ten pounds, or fifty dollars. But before coming to England, it might be well to satisfy that there was no assignment or quit-claim from John Valentine House, who was son of Count Frederick Edward Van Hautzen, who was a son of Andrew Van Hautzen, in times the last of the Counts of the Barony."

Confused? Yeah, me too. Next time, Dastardly Deeds!

Update, 6/25/2013: Here's a link to the page on Len Granger's web site where he talks about the House Heirs Association. Thanks, Len!!
http://www.tiptopwebsite.com/websites/index2.php?username=len1932&page=31


Posted by . at 8:34 AM Email ThisBlogThis!Share to TwitterShare to FacebookShare to Pinterest 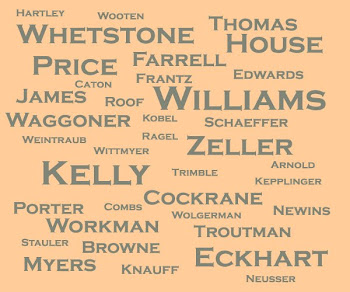 I live in San Diego and Mom who has been at this since 1970 lives back east in the little town where she was born, Frostburg, Maryland. We can't do too much talking about genealogy and the ancestors! And oh the stories:)