Comments by Harry Underwood, researcher that lives in that area and wife descends from Martin Granger.

You asked where John Martin Granger is buried? I think JMG born in 1761- your Revolutionary War ancestor that drew a pension while living in Ft Ann - Washington Co. N Y is buried in the Fort Ann cemetery (no stone). I decided that this may be his final resting place as we have never to my knowledge found out where he died. His wife Sarah I know nothing about. I'm basing this on the work I have done up in Ft Ann at the cemetery regarding my wife's ancestors on her father's side, this includes the caretakers and members of the cemetery commission as well as Virginia Parrott the Town. Historian. As far as I know at this time John Martin Granger lived just a short ways from the cemetery. I have heard more than once that the grave diggers have found human bones while digging graves there. They never said but I suspose that they just covered them up and the burial took place on top of them."

John Martin Granger married Sarah Griffin in Turkey Hills, (Simsbury), Hartford Co, Ct., 11 Mar 1783. John Martin Granger and Sarah Griffin may have discussed marriage then as the Revolutionary War was coming to a close. He had been in the army since 1777 and probably was going to remain in the active Militia. On Saturday, April 19, 1783 Congress announces the end of the Revolutionary War.

John served in the military in Mass., 1777. John Martin Granger was in Captain Fowler's company of Colonel Morley's regiment of Mass troops. He was 5 ft 7 inches in height and with brown hair. (Page 102, Launcelot Granger of Newbury, Mass. and Suffield, Conn. A genealogical History by James N. Granger.) He may have been under age when he enlisted and had been living with parents in Conn. which became his home of record.

John served in the military again in New York. On 15 June, 1778 he went to Fishkill. N Y and joined the regiment of General Putman, enlisting for three years. His prior service home of record in Conn. remained in records.

Comment by #2 - John Martin Granger the following children after he left Mass. can not be certain where they were born. A historian who lived in the effected states, told me there were border conflicts between New York, Mass. and Vermont for years. Vermont was not an original colony and became a state in 1791.

At 53 years of age John became the father of Julius G. Granger in New York or Westfield, Hampden, Mass., 1813.

John Martin Granger was awarded in 1790, a land grant for his military service as per the following record. The location of land grant may have been in Washington County, New York where the family lived until 1840. Revolutionary War Bounty Land Grants: Awarded by L.D. Bockstruck pub. 1996 p. 208 GRANGER, JOHN NY PRIVATE 8 JUL 1790 600 ACRES * This information taken from The Balloting Book and Other Documents Relating to Military Bounty Lands in the State of New York pub 1825 Albany ''...NYS bought land from the Onandaga and Cayuga Nations in 1788 and 1789 and later from the Oneida and Tuscarawa. The Indians had supported the British during the Revolution. Within 3 days after the final purchases from the Indians, NY held the balloting for distributing the land. The name of each veteran was written on a slip of paper and put in a box. The name of each lot was written on another slip of paper and placed in a separate box. As a slip was drawn from each box, they were matched as the veteran's land who then received patents to their land on condition the land be settled within 7 years. The veteran also had to pay for a land survey. A private got 500 acres. 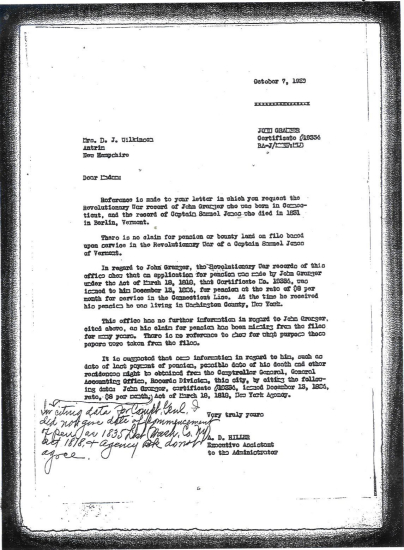 Quote: "The survivors of this group and their friends felt that justice had not been done and petitions were introduced into Congress from time to time until in May 15, 1828, just 50 years after the original act, a measure was passed giving full pay for life, beginning March 3, 1826, to the surviving officers of the Continental line who had been entitled to half pay under the act of 1780, and the same allowance was made to the noncommissioned officers and privates entitled to receive the gratuity of eighty dollars ($80) promised in 1780. This act was executed by the Secretary of the Treasure rather than by the Secretary of War, who administrated the other pension laws until in 1835 it was transferred from the former to the latter office." Enlisted in Capt Morleys Reg. in Mass. Home of record is Conn. where he previously resided with parents. May have been underage at time. 15 Jun 1778 Enlisted at age 18, in Army at Fishhill N Y under command of General Putman. Home of record remains Conn.