The follow picture is the first son of John Martin Granger found in the Little Red Book, and this maybe John Granger. I think you're right about adding the picture to John Granger's page - he does look like my grandpa who I don't remember but my sister does and she says he had the same "soft" look as the picture.

Comments by #2----This is my Allen Granger, born 9 Dec 1803 in Whitehall, VT by his death certificate. Turned out there is no Whitehall, VT and a VT historian told me it was a common thing for people born in the border counties to not be sure where they were born. A doctor in VT would drive his buggy to deliver a baby in N Y and record the birth as VT. So Allen Granger, born Whitehall, NY. He was a farmer and herb doctor (or medicine man). Spent his life in Steuben Co. N Y.

Website of Son, Allen Granger b 1803 - Grave site with pictures.

John applied for bounty land in Canisteo, Steuben, N Y, 1851. Source: NATIONAL ARCHIVES WAR OF 1812 Bounty Land Claim #103821 Year 1851---Filed at Canisteo, Steuben, N Y, by JOHN GRANGER, age 67, who states that he is the same JOHN GRANGER who was a musician in the Company commanded by Captain Thompson in the Regiment of the Militia commanded by General Petit in the war with Great Britain declared by the United States on the 18th of June 1812, that he was drafted at Ft Ann, Washington Co. NY on September 8, 1814 and was honorably discharged at Burlington, VT on Oct 1, 1814 on orders of General McComb.

In 1810, the family was still in Mass. - Tyringham. In 1809, John Martin Granger sold property in Tyringham to John Granger for 400 dollars.  In 1813, John, the son, sold the same premises with a grist mill to William Heath for 250 dollars. In 1816/17 John Granger family is living in Dryden, Tompkins Co. - the Military Tract.  By 1822/23 John is one of the first settlers of Hartsville but before that, I think he was in Howard probably with his brother Lester who was there briefly.  You have to understand that most of these places are within a stone's throw of each other...the township of Canisteo includes the village of Canisteo and Hornell(sville) and Bath (the county seat) and at that time very small settlements like Hartsville and Adrian which sound like towns because they had a post office and a hotel. 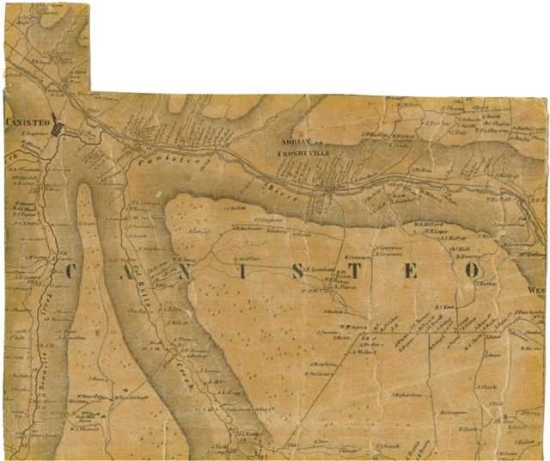 John was a farmer or farm laborer depending on whether he owned the land or not.
Too bad Charlie is not available.  I am not too sure what he finally decided about William's mother.  The death record said John Granger was his father and mother unknown.
I'm pretty certain John Martin is the one in the Balloting Book who got bounty land in the Military Tract for Revolutionary War service but traded or sold it as the book says was so often done.

The following names are burials in the Cline Cemetery located at the corner of Purdy Creek Road (County Route 28) and Ashbaugh Hill Road (County Route 64).  This list was compiled in 1976 and therefore is not inclusive of all burials located in this cemetery.

Granger, Leverett, was born in Springfield, Mass., April 2, 1809.   John Granger his father,  owned a beautiful farm on the Connecticut River, five miles from Springfield, Mass.   Through signing notes for a friend, he was obligated to sell and when the subject of this sketch was seven, we find them settled in Dryden,  N Y.    In 1822 they moved to Bennett's Creek, one mile west of Canisteo,  where they cleared a large tract of land.

When but 18, Leverett lost his mother; he then started to "carve out his own fortune."  Working for ten dollars a month,  he laid  $100 a year;  his life was not all work,  for many a time has he told his children about the New Years Ball, how he took his girl, not in a carriage,  but on behind him,  both on the same horse

After accumulating sufficient fortune to support a wife,  he married Weltha Chapman, by whom he had seven children: Harriet H., Weltha E., Francis G., William II, Horace A., Harrison D., and Daniel S.

He married for his second wife:  Lydia A Rose,  daughter of John Rose, of Greenwood,  by whom he had seven children:  Charles, Elisha, Sarah A. II,  Lee,  M  Ida, and John.

Death has claimed two of his children, Francis G. and M Ida;  the other we find scattered in the East and West, and some remaining on his beautiful farm mile south of Canisteo.

When in the spring of 1894 death claimed his beloved wife, we find him still calm and serene,  for his trust has been in Jesus for many a year.    Though not a Prohibitionist,  he is strongly temperate; do we need a better example than this .....not one of his eight manly sons love the wine cap?  As one has said, "Tis only noble to be good"  then he must belong to the true nobility,  for his life has always been free from quarrel and strife, loved, and honored by all

Ref:  Book review:  Landmarks of Steuben County, New York - by Hon. Harlo Hankes,1896 (Note: Jeanne Parks has an original volume-states it was obviously important to family. Although I believe the biograohy was "enhanced" and put the family in the best light possible as Leverette was a self-made man and a prosperous farmer, I think the BIOS is basically accurate.

Comment #2 "I had just found my gr-grandfather Leverett Granger's Last Will and Testament which also brought a tear. Leverett was the son of John Granger and the grandson of John Martin Granger.
In it he wills some money to each child except his three sons who are still on the farm. To them he leaves "all of my estate both real and personal of every name and nature subject to the foregoing legacies" and tells them "subject to the support and maintainance of their mother, my beloved wife Lydia Granger whom I direct shall be well taken care of as dutiful children should do during her natural life."
The will was dated in 1893 and Lydia died less than a year later.
In ending he tells them..."And it is my wish and desire that the said Charles, Elisha and John shall keep the house in such a manner that all my children shall have a home to come to the same as they now do - and feel free to come as though I was living.
The said Charles, Elisha and John after said legacies are paid shall enjoy the said property equally between them share and share alike." John Granger , mentioned in will  above was my grandfather, the youngest of Leverett's fifteen childen from two marriages"   John Henry Granger -1871 to 1945 -  Canisteo. N Y,  Picture est. 1910 - Submitted by Comments #2 - Jeanne Parks 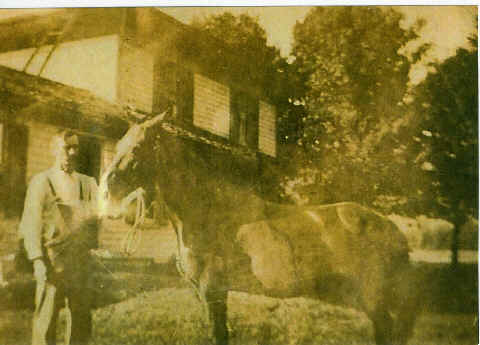 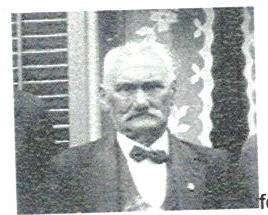