THE SAGA OF ABIAL C. GRANGER

The story of Abial C. Granger is both tragic and interesting as it details the hardships faced by the family from his birth in Massachusetts around 1788 to his death in Iowa after 1870. I have attempted to bring to life his family and related families through the use of pictures and stories that give us a little insight on the happenings of Abial C. Granger and his children. We may not agree with his lifestyle of the 1800's but today we can only see through a small window into the difficulties of that day. I have attempted to be as correct as possible and would appreciate any additions or changes that other family researchers would like to submit. Hopefully you will enjoy The Saga of Abial C. Granger --- Leonard A Granger the great-great-grandson.

The research of Granger family history and related families started when I first obtained a computer and very soon discovered the vast amount of information the computer had available from every part of the United States and the world. With the help of other Granger researchers, the family line was established and the search was completed within a year or so. My siblings and parents had family pictures and generously contributed to make a Granger family file consisting of several generations. In all the researching, a great great grandfather Abial C. Granger was to provide the most interesting life story and it was difficult for me to understand his strained relationship with our Granger family. For this reason, this "Saga of Abial C. Granger" has been written to try to explain why our family over the generations has kept the father, grandfather, and great grandfather hidden for so many years. 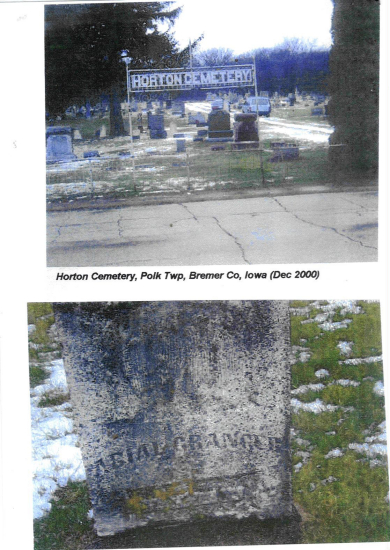 From Abial Granger's birth in 1788 until he married Melissa Gleason in Vermont/Lower Canada in 1823 is a period of some 35 years. We believe he went to Lower Canada and then returned to serve in the War of 1812. While in Canada 1803 to 1812 Abial Granger may have married although no record has been found.

In 1825 Abial Granger family appears in the Lower Canada census living in the Town of Dunham located in a remote area just north of the Vermont border.